Western “half-wits” from “stupid think tanks” are leading their countries down the road of nuclear armageddon with their hybrid war against Moscow, former Russian president Dmitry Medvedev wrote on his Telegram channel on Tuesday. Endlessly funneling weapons and support to Ukraine while pretending not to be directly involved in the conflict will not work, added the deputy chair of the Russian Security Council.

The “security guarantees” proposal unveiled by Kiev on Tuesday was “really a prologue to the Third World War,” said Medvedev, calling it a “hysterical appeal” to Western countries engaged in a proxy war against Russia.

If the West continues its “unrestrained pumping of the Kiev regime with the most dangerous types of weapons,” Russia’s military campaign will move to the next level, where “visible boundaries and potential predictability of actions by the parties to the conflict” will be erased and the conflict will take on a life of its own, as wars always do, Medvedev argued. 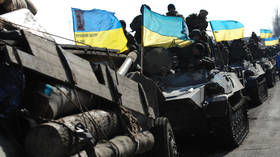 “And then the Western nations will not be able to sit in their clean homes, laughing at how they carefully weaken Russia by proxy. Everything will be on fire around them. Their people will harvest their grief in full. The land will be on fire and the concrete will melt,” Medvedev wrote, before citing a Bible verse from

“Yet still the narrow-minded politicians and their stupid think tanks, thoughtfully twirling a glass of wine in their hands, talk about how they can deal with us without entering into a direct war. Dull idiots with a classical education,” Medvedev wrote.

His comments were prompted by Kiev’s publication of a “security treaty” proposal, developed under the tutelage of former NATO secretary-general Anders Fogh Rasmussen. The draft envisions the US and its allies guaranteeing Ukraine’s pre-2014 borders with weapons, ammunition, financial assistance and training, as well as committing to maintain sanctions against Russia for as long as Kiev wants, and handing over any confiscated Russian property to Ukraine.