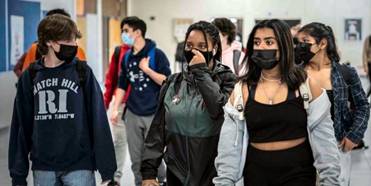 Danielle Serio, who goes by the nickname “Flint,” also offers books that encourage gender dysphoria, sexual aides and one that promotes a “kinky” social media platform. One of the more obscene books the teacher bragged about was called, Everything you Ever Wanted to Know About Being Trans…

“I find the BDSM/kink community to be extremely open-minded and welcoming in every way; it’s a place of sexual liberation,” the book states. “There is often more blanket level of acceptance of transgender people within the kink/BDSM (bondage and discipline, dominance and submission, sadism and masochism) scenes and sites such as FetLife.”FetLife is a social media networking site for the “kink community.”She also encourages poor grammar in her writing class. “When someone says a singular ‘they’ isn’t grammatical…but you’re a writing teacher with a master’s degree,” she said in one TikTok post.

One of her videos also features an interview with the principle of San Juan Hills High School, Manoj Mahindrakar.“In my educational experience, books are always a good thing and any books that support our students, I’m for,” he said.Some books go as far as to encourage students to ignore social stigmas about multiple sexual stigmas. “We all want to have sex with loads of people,” states one book. Another speaks against “whorephobia,” a term coined to reference the stigma against prostitution.