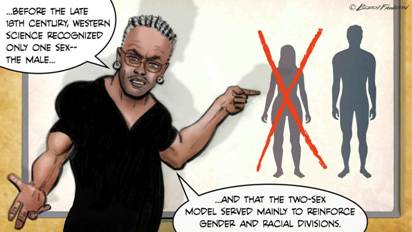 Social media users ridiculed a recent Scientific Americandocumentary claiming that, “before the late 18th century, Western science recognized only one sex—the male” and that “the two-sex model served mainly to reinforce gender and racial divisions.”

The contention that women didn't exist until the 18th century is absurd and is also being taught in classrooms at both the most advanced and the most basic levels. Like critical race theory, it’s based on academic works that steadily gained influence during the last three decades while few outside academia noticed the normalization of their presence.

Now at Johns Hopkins you can find a class on “The Gender Binary and American Empire” which contends that “the sex and gender binary was produced out of colonialism and statecraft in Americas and particularly through US imperialism” while PBS tells school students that “on nearly every continent, and for all of recorded history, thriving cultures have recognized, revered, and integrated more than two genders.”

This historical revisionism isn’t isolated to the classroom, textbooks or social media. Anthropologists are being pressured to stop identifying bodies in tombs as male or female. Historical figures like Joan of Arc are being posthumously redefined as transgender. The overriding goal is to reimagine a history in which men and women didn’t exist until being “invented” by imperialistic westerners to repress the non-westerners they were colonizing.

Transgender historical revisionism is a subset of intersectional revisionist history that reverses the traditional western concept of the enlightenment as the coming of a new dark age that spawned capitalism, colonialism and every possible form of bigotry. Much as the 1619 Project falsely claims that America was not only built on racism, but actually invented it to prop up colonialism, other intersectional revisionist histories make similar claims for the nuclear family, the middle class, free enterprise, men and women and every other norm they want to destroy.