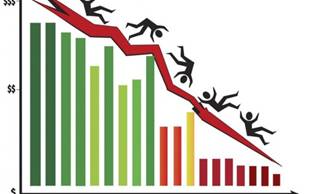 The notorious Nouriel Roubini, who came to prominence for predicting the financial crisis of 2008-09 and was dubbed “Doctor Doom” by Wall Street. He’s now saying that a historic market crash is coming as the central bank tries to tackle the inflationary crisis they created.

The economist cautioned that the United States regulator’s moves to attempt to rein in runaway inflation could tank the economy, and cause crashes across stocks, bonds, housing, credit, private equity, and other assets in bubble territory. However, if the central bank gives up on fighting inflation, price increases could spiral out of control.

He argued that the Federal Reserve might have to double interest rates to 5% in order to curb inflation. However, such an increase could choke economic growth and cause a spike in joblessness, Roubini stressed. Moreover, raising rates could trigger a debt crisis. –RT

Persistent inflation due to fiat currency created by the central banks at the behest of the ruling class has been the primary driver of inflation, But the ruler’s insistence on continuing to panic the public over the coronavirus scandemic might force the Fed to drive the U.S. economy into an even deeper recession than the one it has so far avoided, Roubini warned.