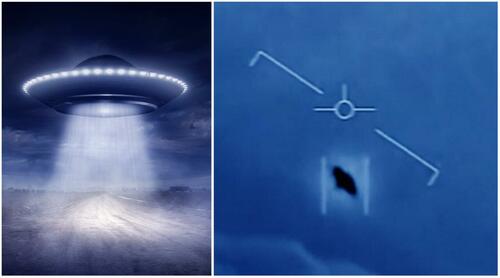 The new spending plan for the United States’ intelligence agencies includes a directive to the Pentagon to concentrate its examination of unidentified flying objects (UFOs) on the types of objects that the military is unable to classify.

fter years of discoveries of weird lights in the sky, first-hand testimonies from Navy pilots regarding UFOs, and investigations by the government, Congress seems to have conceded something unexpected in print: it does not think that all UFOs are “man-made.”

Two shocking assertions were just made by Congress, but they were buried deep inside a report that was an addition to the Intelligence Authorization Act for Fiscal Year 2023. This act is the budget that oversees the United States’ clandestine operations.

Number one is that:

The second reason is that it wishes to differentiate between extraterrestrial craft that originated from humans and those that did not:

“Temporary nonattributed objects, or those that are positively identified as man-made after analysis, will be passed to appropriate offices and should not be considered under the definition as unidentified aerospace-undersea phenomena,” the document reads.

According to VICE, the admission is particularly shocking for a number of reasons, the most important of which is that, as more details concerning the investigation of UFOs by the United States government have been made available to the public, a number of politicians have avoided claiming that the unidentified objects originated from another planet or another dimension.

The acceptable speech surrounding UFO’s up until now is that sophisticated, man-made vehicles are the most plausible explanation for the existence of unidentified flying objects (UFOs). Politicians most times refuse to publicly entertain the idea.

As VICE points out, when pressed explicitly about the possibility of aliens on The Late Show with James Corden, for example, Obama declined to affirm the existence of extraterrestrial life but did add that people had seen a lot of unusual things in the sky recently. On the other hand, it seems that the Congress wants to now make a clear distinction between things that are “man-made” and those that are.. you know.. not so “man made”.

According to the description provided by the Pentagon, a “cross-domain transmedium” danger is one that may migrate from water to air to space in ways that we are unable to predict or control. In July, the Pentagon made the announcement that it was going to examine these dangers by establishing the All-domain Anomaly Resolution Office, or AARO.

This may have something to do with a topic we covered last year titled “US Navy Detects Crafts That Travel ‘Hundreds Of MPH’ Underwater Ahead of Pentagon UFO Report,” which you can read at that link.

Unidentified Aerial Phenomena, which is the term used by the government to refer to UFOs, would be renamed Unidentified Aerospace-Undersea Phenomena under this bill, and the office inside the Pentagon would also be renamed to reflect the new title.

A video that had been leaked and then authenticated by the Pentagon seemed to show an unidentified flying object (UFO) gliding over and below the water without making a sound last year.