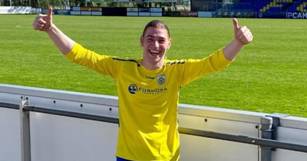 A 31-year-old Dutch male-to-female transgender celebrated being allowed to play football with a group of teenage girls and use their changing room by saying it was “the best gift I could get.”

However, after being given a new passport that certified the biological male to be a woman, Schepers was then able to register as a woman with the KNVB.

After initially encountering difficulties with his hometown team in Westerbork, Schepers traveled 200 kilometers to join up with a team of teenage girls in Lisse, with Schepers proclaiming it to be, “The best time of my life.”

“I was finally accepted by my teammates. I joined in,” said Schepers, adding that the ability to use the same dressing room as the young girls was “the best gift I could get.”

However, Schepers was subsequently suspended from playing by the KNVB due to him being significantly older than teams comprising of players under the age of 20.

“I’m 31 years old, but I don’t feel that way. I’m full of hormones, and I feel like a 15-year-old girl,” said Marjolein. “The KNVB is afraid that I am too strong to play with and against young girls. That is not the case, and you cannot judge that from a chair in Zeist.”

Marjolein insisted that the KNVB should come and watch him in a training session to reassure them.

“You will see that the happiest girl in the world is playing a nice game of football with her team,” said Marjolein.

Aside from the moral and sexual problems with a 31-year-old biological male using the same changing room as a bunch of teenage girls, Schepers clearly enjoys a physical advantage over the other players he will come up against.