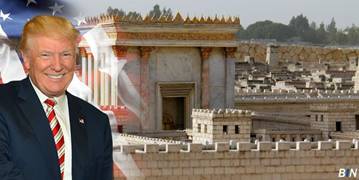 Not long ago, the Sanhedrin authorized the minting of two coins—the “Half Shekel Cyrus Trump Temple Coin,” and shortly thereafter, the “70 Years Israel Redemption Temple Coin,” both of which depict Donald Trump and the ancient Persian King Cyrus (who empowered the building of the Second Temple) on the front side with the Third Temple on the back.

In an article for Breaking Israel News, the reasons for the commemorative coins were tied specifically to the Trump administration as the catalyst for building the Third Temple. In fact, rabbis associated with the effort went so far as to say the success of Trump’s presidency and his next possible election depends on his efforts to initiate the building of the new Solomon-like house of worship.

“In gratitude to US President Donald Trump for recognizing Jerusalem as the capital of Jerusalem, the nascent Sanhedrin and the Mikdash (Temple) Educational Center are minting a replica of the silver half-shekel Biblically mandated to be donated by every Jewish male to the Temple,” the report stated, before adding, “Rabbi Weiss stressed that Trump’s [US administration] goals will come to fruition only if they are geared towards rebuilding the Jewish Temple” (emphasis added).

“Cyrus and Balfour, non-Jews who played an enormously important role in Jewish history fell short and their political success suffered as a result,” Rabbi Weiss said.

“Trump’s political agenda can only succeed if it is focused on building the Third Temple on the place that God chose: the Temple Mount. He must not advance any two-state solution or this will lead to his downfall.”[i]