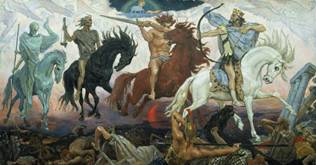 What I am about to share with you is extremely disturbing.  There are some that don’t want to hear bad news like this, but most people would rather know what is coming so that they can prepare for it.  As I have been documenting on my websites for months, we were already heading for a nightmarish global food crisis even before the war in Ukraine erupted.

Fertilizer prices have risen to absolutely absurd heights, and this is going to depress agricultural production all over the planet in 2022.  And of course the war in Ukraine has now made this emerging crisis a whole lot worse, because Russia and Ukraine collectively account for approximately 30 percent of all global wheat exports under normal conditions.

So with everything that has been going on, it is absolutely imperative that we have a good growing season here in the United States this year.  Unfortunately, it appears that a series of “mega disasters” is going to prevent that from happening.

In recent days, a number of people have written to me about the bizarre storms and unusually cold temperatures that we have been witnessing in our agricultural heartland.  Winter has stuck around a lot longer than usual in the middle of the country, and this has prevented large numbers of Midwest farmers from planting their crops in a timely manner…